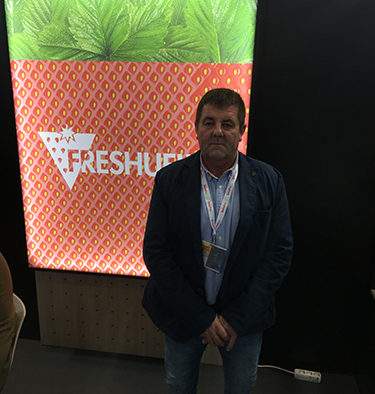 The Bonares cooperative wants to give entry to the new generations in full expansion phase. It is one of the priorities of the new president, Lucas Domínguez, who comes to the post “with great enthusiasm and desire” that the younger farmers take the initiative and join the new farm “El Canario”. The forecast is that the new 200 hectares will be 100% worked within a period of three years. In this campaign, 40% of them are already fully operational, which has allowed to increase production by 15% in strawberries and 20% in blueberries after last year there was less production in this last product.
Bonafrú, according to its president, will remain loyal to the cultivation of berries, contrary to other firms of the sector that are betting for diversification, and wants to dedicate its new cropland mainly to strawberries, which is its second product in importance now, after raspberry. The new governing council considers, in the words of Domínguez, “that we should look more at the cooperative and not so much at the competition, believe more in ourselves”.
This campaign, which arrives late but with reinforced production, is the second in operation of the new lands, with “excellent results”, according to the manager, Diego Barriga. “We are having good quotes and high demand from European channels”. In varieties, the cooperative maintains its commitment to Adelita, Lupita and Lyon in raspberry, its main product, and looks for new materials that allow it to be sold throughout the year through trials with programs such as FNM. In strawberry, Rociera and Fortuna the production of the cooperative is divided.