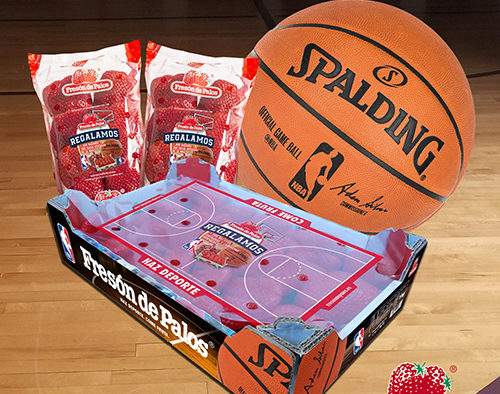 The most representative crop in Huelva, strawberry, continues to maintain its place and the consumption prospects are positive, inside and outside of Spain. Reference firms such as Fresón de Palos have contributed to its projection, not only for its great volume of marketing and know-how for almost four decades, but also for its well-known communication campaigns. After including the strawberry in powerful promotions of films like The Smurfs and Peter Rabbit through agreements with the company Sony Pictures, this campaign 2018/2019 surprise with a collaboration with the NBA. In this way, they seek to combine sport and healthy eating, seeking to approach, in addition to their consolidated target, also a younger audience, as their Marketing Director, Jaime Zaforas, explains: “We want to reach a younger consumer and rejuvenate the target. Introducing them in the consumption of berries will be a way to grow the category in the coming years. We want to grow with consumers and position ourselves as an alternative of healthy food”.
The recognition and implementation of the brand is the result of many years of work, a work supported by the productive and commercial capacity of the company that is guided by a long-term strategy, which each season is materialized in tactics and actions in the multimedia world, from television, through social networks, radio, press, magazines, to promotional work in the point of sale.
The experience and good work of its farmers added to the innovative character of the entity in investments in technology and digitalization, both in the field and warehouse, has always made them be at the forefront of an increasingly advanced sector. “Our robotic lines allow us to work with one million kg per day at the peak of the season. The incorporated technological improvements and the introduction of ERP systems have revolutionized the concept of agriculture, allowing to trace and, from a single screen, control the flow of goods in detail. This contributes to add value to the service of the client, among other aspects, by the immediacy and agility in the processes”, indicates Zaforas.