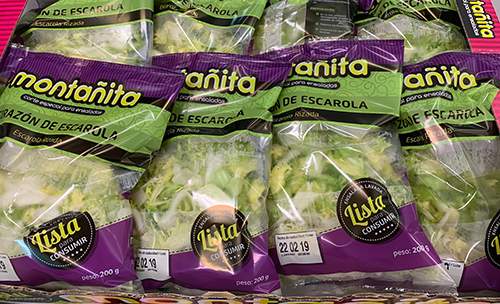 Frutas Olivar is the clear example of success when combining an own brand and fourth range in salads. Its Montañita does not stop growing and consolidating in the market thanks to its innovative image and its wide range, according to the general manager of the company, Andrés Álvarez. Although the firm is not a direct operator of fourth range salad, it has managed to position itself and bring innovations to the sector such as flower blend, an ingredient that Frutas Olivar directly produces through its subsidiary Innoflower. This product is an increasing segment, relaunched in the Spanish market by different television cooking shows.

This year they have also added, with great success, the baby spinach to its IV range brand Montañita, in a supermarket in Hong Kong. The manager of the company is very optimistic about the expansion of this line of business. On the other hand, the company undertakes the year reinforcing its imports from South America and opening a bio line of fruit and vegetable, a trend that Álvarez ensures that “has come to stay”. By products, the highest growth is registered in imported pineapple, by sea. Another asset is its future entry into out-of-season citrus fruits with direct importation. And as a novelty, Frutas Olivar will extend its Olinda fruit brand to watermelon.